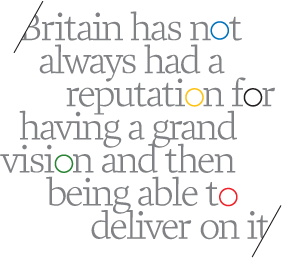 PODIUM meets the former Goldman Sachs executive Paul Deighton, the man charged with delivering the biggest sports event that the United Kingdom has ever seen and changing that perception

If Sebastian Coe is the public persona of London 2012, then it is Paul Deighton, CEO of the London Organising Committee of the Olympic Games (LOCOG), who provides the organisational acumen and drive responsible for delivering the most complex event in the sporting calendar. Only the football World Cup is comparable with the Summer Games for global interest, and even that does not confront the multi-faceted difficulties of staging 26 sports, with 10,000 athletes, watched by 8m spectators and attended by 20,000 media. Hosting the Olympics and then the Paralympics is probably the biggest logistical challenge that any country can face outside being involved in
a war.

Yet, with a year to go to the Opening Ceremony on 27 July 2012, the London Games, to many people’s surprise, is not only on track but, in many ways, some laps ahead of former hosts of the quadrennial event. Although Beijing was a masterpiece of authoritarian state planning, Athens in 2004 was repeatedly being warned for its tardy preparation. Sydney, although ultimately a triumph in 2000, suffered a torrent of domestic criticism in the build-up, and Atlanta in 1996 is remembered with little affection. The International Olympic Committee (IOC), which oversees the hosting of the Games, is more than simply satisfied at how the preparations are going. Publicly, and more significantly privately, it is delighted.

Much of the credit for this must go to Deighton, whose appointment from being a senior partner at Goldman Sachs was an inspired choice of Lord Coe, especially as it did not seem a natural fit to some. The headhunter charged with short-listing candidates told Deighton when he inquired about being considered for the post: “The last thing we need is some testosterone-crazed investment banker.” Fortunately, Deighton’s name was mentioned to Coe, who could see the bigger picture.

Deighton had always been fascinated by the Olympics ever since, as an eight-year-old schoolboy, he listened on the radio to the 100m freestyle at the 1964 Games, when Britain’s Bobby McGregor was edged out for the gold medal by American Don Schollander. Although Deighton never dabbled in British sports administration, his interest in sport had remained strong through his degree in economics at Trinity College, Cambridge (famous as the location for the Great Court Run depicted in Chariots of Fire, the classic film about the 1924 Paris Olympics).

He was at work at Goldman Sachs on 5 July 2005, when the news that London had got the Games came through from Singapore. Deighton was enthused but did not consider becoming personally involved until he was skimming through a newspaper while watching football on television one Sunday afternoon later that year. There was an advertisement for the CEO of LOCOG. “I thought: ‘Wow! Wow’,” he recalls. “I showed it to my wife and she said: ‘That’s you’.”

Deighton’s job at Goldman Sachs gave him immense satisfaction and money, given he was the 458th richest person in Britain (according to The Sunday Times) when he applied for the LOCOG role. This allowed him to take a huge paycut, which for 2009-10 was still £480,000 (he donated his bonus of £298,000 to charity). In 2006, he moved into LOCOG’s London offices on the 23rd floor of One Churchill Place in Canary Wharf from where the rapidly developing Olympic Park in Stratford is
clearly visible.

Does he have any regrets about the move, given that Goldman Sachs is not so regularly in the public spotlight as LOCOG? “No, because I am so totally absorbed in the challenges of the Olympics, I have no time to look backwards,” he says. “As wonderful as my former job was, it was not a platform to get into sports politics, charity, you name it, every aspect of national and international life in the way that this does. So there is no way that I regret doing it. It is absolutely consistent with the extraordinarily stimulating set of challenges that I expected. That does not mean that, from time to time, there are not moments of stress and anxiety which may make me scratch my head and think: ‘Why did I do this?’ But I certainly don’t regret it.

“Coming from a private sector background, I dealt with the Government and with its agency (the Financial Services Authority). But this job is absolutely fulfilling and you have to deal with such an incredible range of things: sports politics, both national and international, lots of other areas of life, and every sector of government—national, regional and local, elected politicians and career civil servants. “

“You also have to find out how they work and what motivates them. And it is not the same thing that is driving them. It is quite a skill to get it right. For me the nuanced understanding of what it takes people to drive through the public sector was quite a steep learning curve. Frankly, I was aided only by the fact that this is such an important project that everyone wants to help you. So this made it easier for me to get over my initial clumsiness in the arena because everyone wants it to work.”

“Both this government and the last have been right behind the project—there is considerable mutual trust. But nothing quite prepares you for the extraordinary combination of working with both the public and private sector and the scrutiny you get from politicians and the media, and there is the sheer scale of what has to be done in a short period of time.”

Deighton compares the “relentless intensity” of the job to skiing, like being on the “black run” all the time. “There is no opportunity to be on the “blue” or “green” run… In this job there is a relentless intensity of what you have to do under this kind of scrutiny and if you have a weak technique you are going to be found out. That is the challenge—the intensity. As a result my leadership skills are being challenged all the time.”

It is just as well that so many employees speak of Deighton’s calmness and shrewd judgement. Unlike almost all other jobs, this one is building up to a huge climax—the actual staging of the event. As he points out: “That is the time when you don’t have everything under control, for instance the weather or the medal success of Great Britain.”

Although he revelled in his role at Goldman Sachs “doing fascinating things with really good people”, Deighton knew he wanted to do something new and the multi-faceted features of the job at LOCOG was one attraction, as was building up a team; it currently numbers 1,500 people but by Games time will be 6,000. He was aided by the fact that there is an “almost religious zealotry” about the people employed at LOCOG: “There was no need for motivation”.

Probably the biggest challenge that Deighton had to face after he was appointed was financial. Hosting the Olympics is divided into two distinct areas. First, there is building the venues, the media centres, the Olympic Village and the regeneration of a great swathe of east London. This is being carried out by the Olympic Delivery Authority. Second, there is the staging of the Games. The total cost for both is £9.3bn with LOCOG overseeing a budget of £2bn. The income to meet this expenditure is generated in three main ways, which should each contribute roughly a third—£633m.

The first is revenue from international television rights and sponsorship, from companies such as McDonald’s, Coca-Cola and Visa in what is known as the TOP programme. These long-term deals are handled by the IOC, which also handles the television negotiations. Second is domestic sponsorship, which has now reached about £700m. The third is ticket sales and merchandising. The first round of ticket sales has gone so well—despite the inevitable complaints from those who missed out on the blue riband events—that it is expected to raise more than £500m with the merchandising bringing in a further £100m. A
balanced budget is likely in 2012, with the possibility of
a surplus.

How has LOCOG done so well in sponsorship given the difficult economic circumstances? “Like most things, it was a combination of luck and judgement,” Deighton says, modestly. “The budget was a priority. It was important to get the momentum going and get early success with sponsors. We recognised that certain sectors were buoyant. Banking was very strong. So we applied the principle that when the sun is shining, that is when you go. You don’t wait for the clouds. We needed to get a few sponsors in the stable.”

So Lloyds TSB was quickly signed up followed by other Tier One partners, the highest echelon, such as Adidas and BT. Such swift signings meant other organisations were encouraged to join them. What was gradually evident was that the Games were not only expected to be a success but also that this was a “once-in-a-lifetime” opportunity. The Tier One group has been joined by seven Tier Two supporters and 25 Tier Three suppliers and providers, for services that the Games require. LOCOG was able to secure the vast bulk of the financial support before the economic crisis really began to hit home. It would have been a different scenario if London had got the 2016 Olympics (to be staged by Rio de Janeiro) and been seeking sponsors from 2009 rather than 2005.

The next 13 months are expected to be dominated by preparing for the “operational delivery”, with test events at Olympic venues—most of the permanent ones having been completed—and also at temporary sites, such as Greenwich Park, scene of the equestrian events.

While Deighton and his staff continue with their preparations, they know that, after the Olympics and Paralympics, most will be unemployed and the remainder simply winding down the organisation. Has this been a problem? No, Deighton says, because “people understand the journey. But we have also established a talent pool and can help people into their next jobs, with Games sponsors for instance.”

How about his future after 2012? “Just as I don’t look back in my career, so I don’t look forward. It depends how it all goes but I will definitely need to decompress for a time.” Deighton, a season-ticket-holder at Arsenal, was linked with a post as CEO at the club (subsequently filled) but after the job at LOCOG, it may well take him some time to generate the necessary enthusiasm for a new role.

For now, Deighton’s focus is on the Games. And when the world returns home after the last event, how would Deighton like the London Olympics and Paralympics to be remembered, apart from the expected displays of supreme sporting prowess?

“Britain has not always had a reputation for having a grand vision and then being able to deliver on it,” he says. “I would like people to see that Britain can put on a great show: win the bid; build a brilliant Olympic Park; deliver an Olympic Games and create a legacy for years to come. I want it to be a brilliant demonstration of what we are capable of and, rather than sometimes undermining ourselves, it can be something of which we can be justly proud.”

John Goodbody is Olympics correspondent for The Sunday Times

Paul Deighton
The Road to London 2012

The IOC cuts down the shortlist to five—London, Paris, Moscow, Madrid and New York. Sebastian Coe replaces Barbara Cassani as head of the London bid.

IOC President Jacques Rogge announces London as the 2012 host, defeating Paris by 54-50 in the final round in Singapore.

BMW becomes the seventh Tier One partner as sponsorship nears the
£660m target.

Deadline closes for the first round of ticket sales. 20m applications received